Is Failure of the Oroville Dam Possible?

“The last couple of days have not made me very confident in the predictions of engineers associated with the Oroville Dam.

While I am a climate researcher, and not hydrologist, it took me less than an hour midday yesterday (see comments here) to estimate that the emergency spillway would be breached around 9 a.m. PST this morning. I was off by an hour…it was breached at 8 a.m.

But engineers were leaning toward the lake level never getting that high (901 ft.)

This kind of calculation isn’t rocket science. As long as inflow into the lake exceeds outflow (both of which are monitored hourly), the lake level will rise.

Why were engineers reluctant to predict the (admittedly historic) event?”

The latest releases have caused even more damage widening the hole and cutting away at the side of the hill. The lake is at about 95% so they have to keep releasing I would suspect. This is an earthen dam and if this thing goes it will be a major catastrophe. If you live in California stay alert you do not want to have all that water and earth coming at you.

here is a short video:

A video posted on YouTube shows big trouble at the dam, as the spillway has developed an almost 200 ft. hole. For the earthen filled dam this may turn out to serious, though officials are saying there is no danger at this point. .

According to Wikipedia this is the most important water source for the California Department of Water Resources’ State Water Project.

“The Oroville-Thermalito Complex is a group of reservoirs, structures, and facilities located in and around the city of Oroville in Butte County, California. The complex serves not only as a regional water conveyance and storage system, but is the headwaters for, and therefore perhaps is the most vital part of, the California Department of Water Resources’ State Water Project, the world’s largest publicly built and operated water and power development and conveyance system.”

“Operators increased their water releases at the dam on Tuesday as a significant storm rolled through Northern California. However, as peak water releases started happening around noon, people started noticing some concerning signs”

In terms of a catastrophic failure besides the residents below who could lose everything and the immediate lose of life, there also could be major impacts throughout California in terms of water and power.

This is something to definitely keep an eye on.

Like Loading...
1981 was the year I believe. WNEW the NY rock station I listened to most of the time had just made the big announcement. They always pumped it up a bit….”stay tuned we have a big concert announcement coming up at so and so a time”… So tuned in I was, when it was announced that THE Clash would be playing several shows at Bonds International Casino in Times Square. Now you have to understand that rock concerts were really my thing back then. It was not that unusual for me to go to Madison Square Garden to see a show even if it was by myself, I could have a blast anyhow. So with the few dollars I had I headed to catch the 6 train downtown and get me the 2 tickets I could afford. When on my way I ran into Joe Mac. from Archer St. I always liked Joe, we went to HS together at Christopher Columbus HS, a block or so off Pelham Parkway. We both liked the same sorta stuff back then…if ya know what I mean?….
Any way Joe decides to go downtown with me cause I guess he figured he didn’t have anything better to do that day. Well we hop off the train a 42 St. and climb the stairs to the street. Hmmmm? nobody around, maybe we are gonna be the only ones get here this early, so we go around the corner toward where the ticket booth would be and can’t believe what we see, hundreds, no a thousand at least, people on the street, cops putting up barricades, I mean pandemonium! 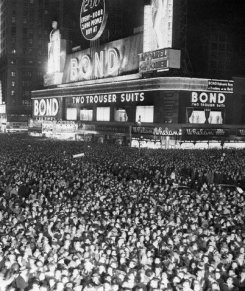 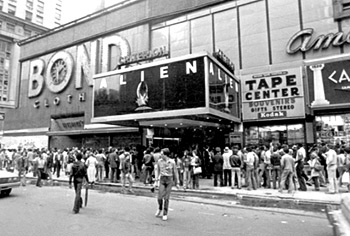 So over the course of the next several hours me and Joe, through some slick maneuvering had managed to get pretty close to the front when they began selling tickets. Now the police had the barricades set up like a funnel so as you got closer to the ticket window you worked down from about 20 people wide to 1 or 2 wide.
Several minutes before we got to the window the scalpers were asking how many tickets each person was getting, as they were in line also. I can’t remember what the limit was for sure, but it may have been around 8. When we got asked and said we were only getting one each, dude peels off a bunch of bills to each of us and tells us get the limit and he will give us a little something for it when he gets through the line also. Slowly as things tightened up this dude is further and further back from us jammed in 20 deep and way back there when I hit the window. I get my limit and see that he is stuck in the crowd so being the sinner I was and having my little bit of money left I take off toward the train hit the corner and book it. About 2 blocks later I ditch into a bar grab a beer and sit by the window.
Low and behold here comes Joe with the same trot, I put my beer on the bar, ok I downed it first, and catch up to him just as we hit the station, jump the turnstile and catch the train heading back to the Bronx as, the doors are shutting. Not one of my proudest moments now but then, sticking to a scalper seemed the right and noble thing to do. One more thing I forgot, while in line I opened the case that had the big poster in it, like a movie poster at the Theater, pulled out that bright yellow and red Clash poster rolled it up and had it on my wall for years. 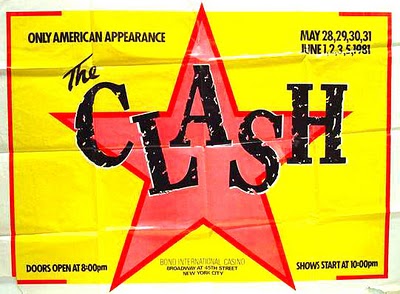 If you remember anything about those shows, you know that the first night the Fire Marshall shut them down because they had sold like 7 times the amount of tickets for each night, instead of just that total for all the nights they were scheduled for. So in the end we wound up having like 7X as many tickets, because the Clash said they wound honor all sales and wound up playing shows for a lot longer than expected……true Rockers that they were….loyal to the fans.True story!  Sometimes I miss those days, but at least I can still give a shout out to Joe on Facebook wherever the thought arises and Joe..he’s always ready to say hey man , Love ya Joe!